We departed Moret-sur-Loing at 7.45am and joined the river Seine some 10 minutes later.  We don't have AIS fitted, so I was positioned at the bow acting as look out and straight away there was a large commercial coming upstream across our intended path to join the river Seine, so we held off until he had passed before we turned downstream.

We moored up at Melun PK110 at 11.30am.  We didn't manage to moor here the last time we came through 5 years ago as we didn't get through the lock in time before it shut.  Its a good mooring, but there is a lot of wash from the commercials going through.
We didn't go to bed until after midnight as we had some youths sitting on a bench near to the boat and we felt a bit uncomfortable going to bed while they were still there, but by midnight we were getting tired so we thought, oh well we will just have to go to bed, as soon as we switched our saloon lights off, they went, maybe they were waiting for us to go to bed before they left, so we should have gone to bed sooner!!! 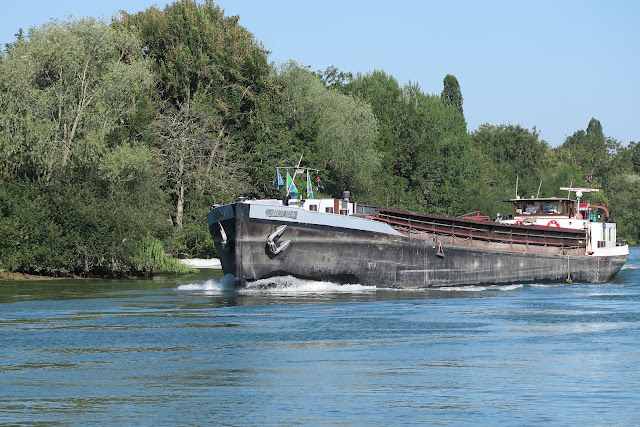 The mooring at lock Évry was great, we moored before the lock and as far upstream as we could as we'd read that commercials turn up quite late and sure enough three commercials arrived around 8pm and they left very early the next morning.


We had a very enjoyable two weeks in Paris, we walked miles and miles, used the Batobus once which was great, visited cathedrals, museums, exhibitions, had friends visit and the weather was amazing, a bit too hot, but better than rain.

We went to a digital exhibition at Atelier des Lumière featuring work by Gustav Klimt, I think I enjoyed it more than Kev! 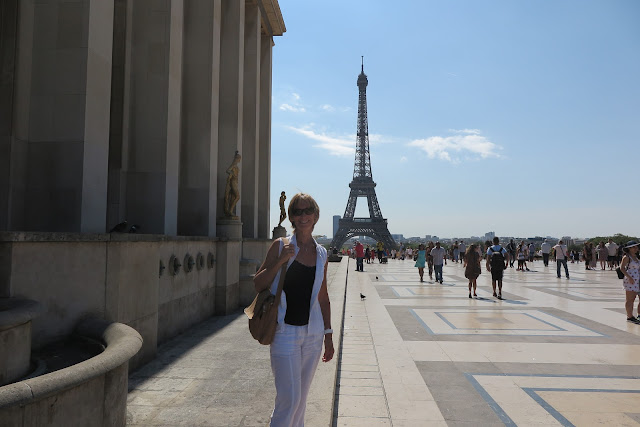 We were in Paris for the football World Cup semi final and final.  Paris erupted when France got through to the final and then when they won, well the celebrations lasted ALL night.  We were pleased to be in a secure mooring at Port du Arsenal, the noise outside the port was tremendous, I don't know how the Parisians had the energy to make that much noise for so long!!  We were jolly glad England wasn't in the final, we might have had to hide our flag!

The remainder of our 2018 trip will be written very succinctly as its taken me until April 2019 to write it!! also I'm writing the onboard and Ive left my note book at home so the hours indicated for our trips now is engine hours not true journey time as we tend to switchoff engine when we can, especially going down.

We departed Port du Arsenal and made our way to Nogent on the river Marne.  We got delayed at one lock where we had to wait for two hours for commercial traffic.  Nogent wasn't a particularly great mooring under a bridge but we were pleased we had booked there seeing as we were delayed so long at lock St Maurice.  Our mooring guide had the incorrect VHF number for lock St Maurice so we were not getting a reply, the correct number is VHF 19. 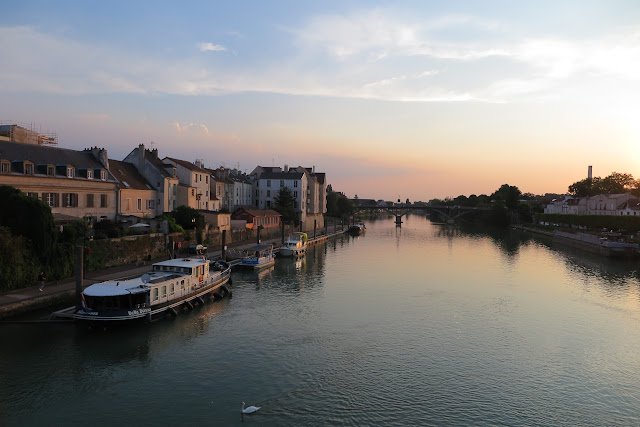 Lagny is a great mooring, we stopped here our first year in France on our way to Paris.  This year we stayed here for two nights.  Free mooring and you pay at tourist office nearby for electric.


Meaux is a great mooring, lots of pontoons, but it does get busy.  They'd had floods at some point and one of the pontoons the electric points did not work.  There was no charge for mooring there We stayed here 4 nights and visited the World War 1 museum which was excellent and well worth a visit. https://www.museedelagrandeguerre.eu/

It was a long days cruise but very beautiful on the river.  We stayed 2 nights at Chateau Thierry, a very nice place, with a great market. 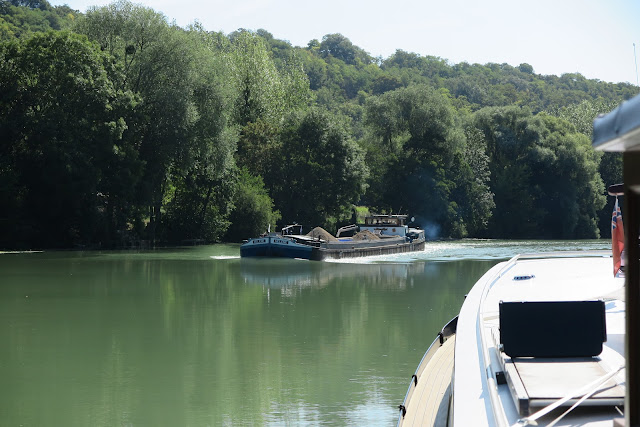 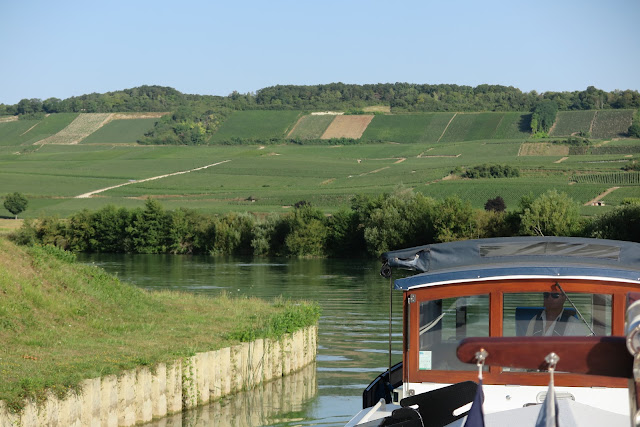 Dormans is a great mooring with electric and water, very popular, we saw quite a few boats coming and going.  We had our  friends Dave and Clare for dinner one evening, which was lovely, Barge Lyneve with Steve and Lynda had moored up and they came for drinks to meet Dave and Clare and we had Dean on Piper barge Angela Dawn moor alongside for one nigh so we had a nice sociable time there.  All this time from Paris we are in a heat wave which was great but very exhausting. 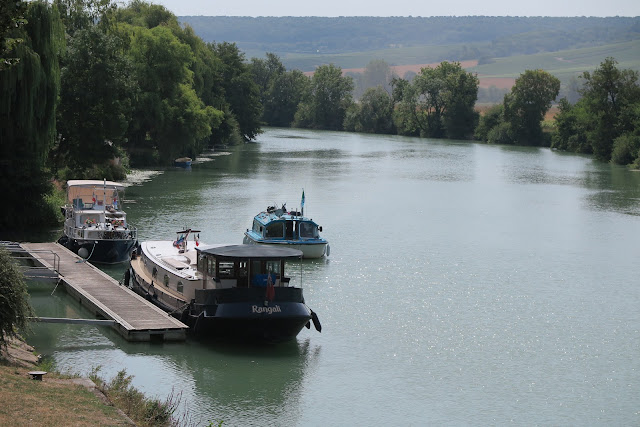 We were pleased to see a vacant pontoon at Damary as we wanted to stop here to go back to a Champagne house to buy some more of their Champagne.  We only stayed one night as there was quite a bit of coming and going at night with youths jumping into the river off the nearby bridge in the dark and we felt a little unsafe.

We left the river Marne and joined the Canal Lateral a La Marne.  We were sorry to leave the river, it is a beautiful, meandering river, lined with vineyards and trees.
Mareuil is a great mooring, lots of space and has a very nice feel about it, so we stayed 2 nights

We had reserved a place at Chalons.  There is plenty of space for cruisers but not so much for barges and even less if a hotel boat is in port.  The town grew on us slowly over the 3 days we stayed there. 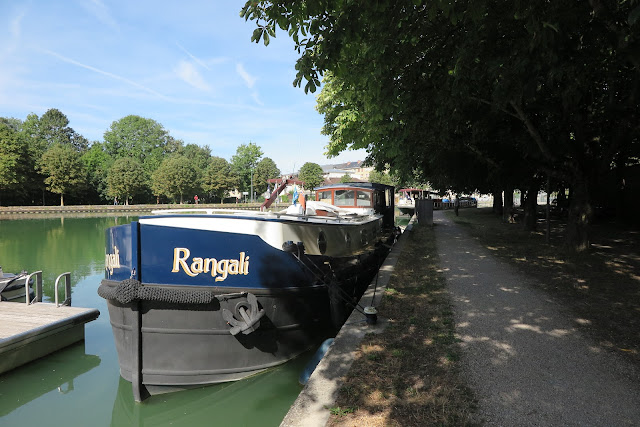 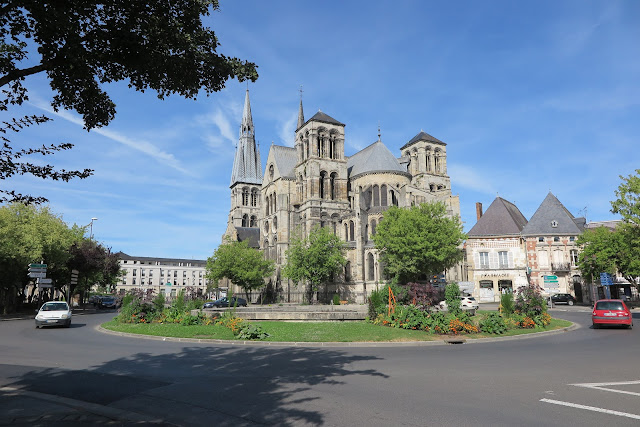 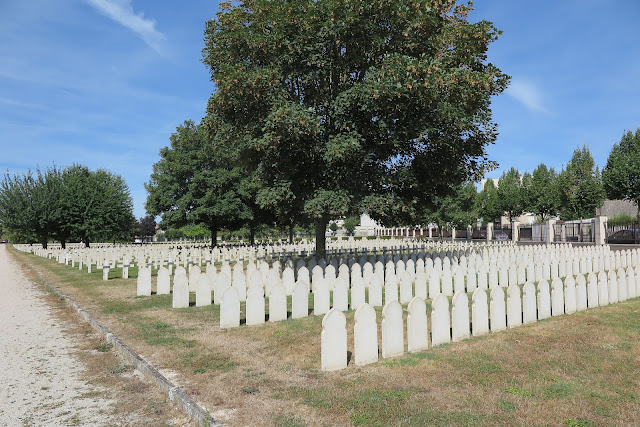 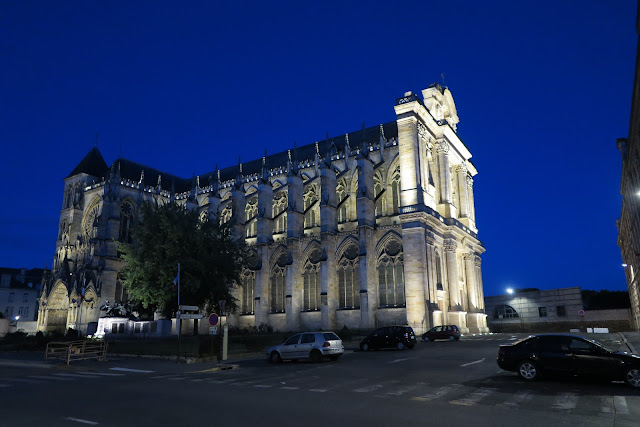 We are pleased we moored here the night rather than going on further to Vitry le Francois as when we went past Vitry the following day it didn't look like a very nice port, very crowded with old barges and commercials, but this mooring was only worth staying one night. 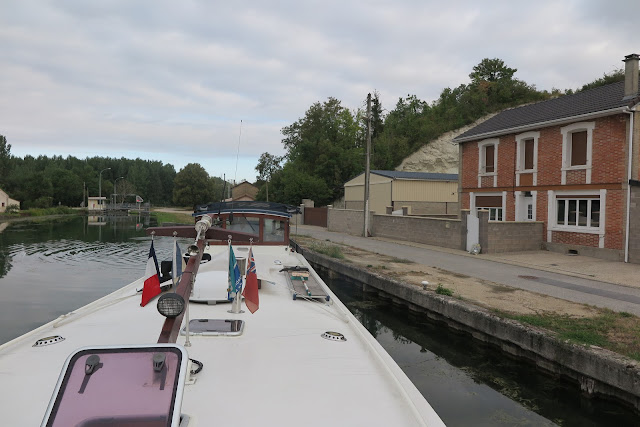 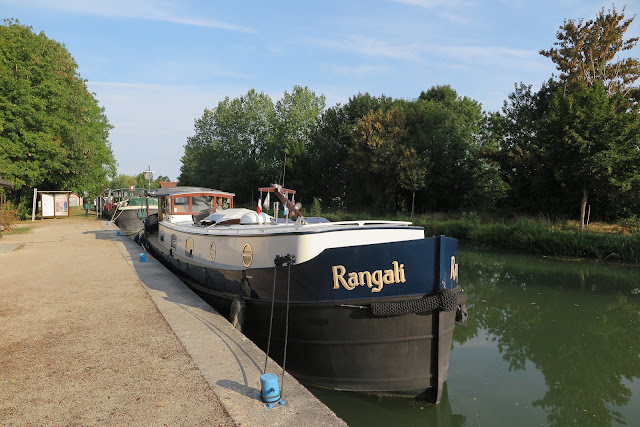 The first part of the Champagne Bourgogne Canal didn't look too promising but once we'd got through the first lock it improved.  We were given a controller for the locks and quite a few of the locks you didn't even have to pull the blue pole you just used the controller to work the locks.

We stayed two nights at Orconte, it was a nice mooring, and we met a very nice couple on barge Riccall , called Alex and Louise who had spent quite a few days moored at Orconte. 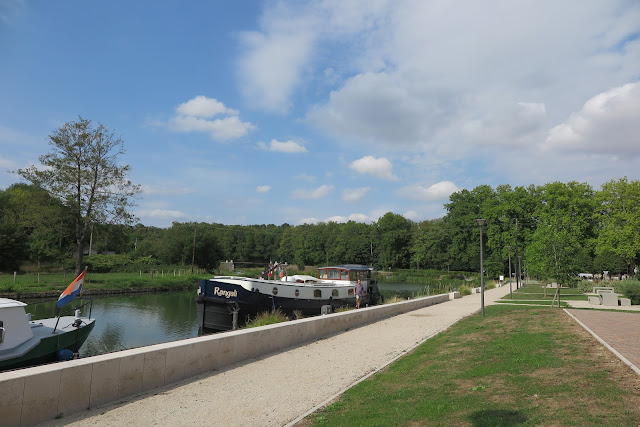 We stopped at St Dizier but there was no shade, still very hot weather, so after we'd popped to te supermarket we carried on our journey to a much nicer moored at Chamouilley.  We liked it so much there we stayed 3 nights. 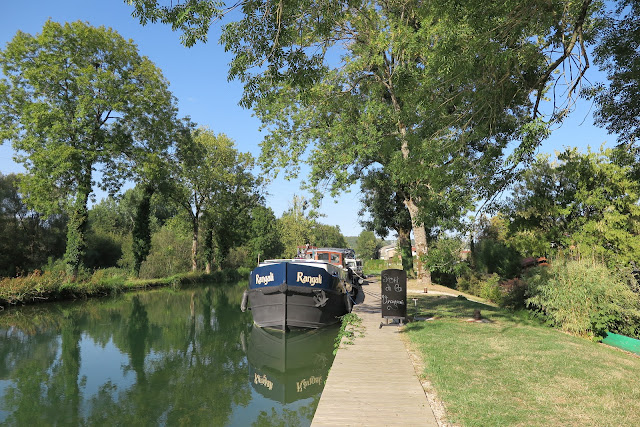 Another nice mooring at Jonville,  we stayed here 2 nights.  It is a private mooring belonging to the hotel and there is a restaurant there where we had dinner one night, very nice.

This was a nice quiet mooring.

Thursday 23rd August
Rouvroy PK 72 to Froncles PK85
Froncles is a big mooring, lots of space, with a big camper van park right next to the mooring, it was busy but still a nice mooring.  Supermarket within walking distance.


Friday 24th August
Froncles PK 85 to Chaumont PK 110
25km 11 locks 4.7hrs
The scenery is lovely on this section of canal. pine trees give the canal a different feeling.
The mooring at Chaumont wasn't that pretty, strange concrete bollards but we stayed for two nights.  The was electric and water. 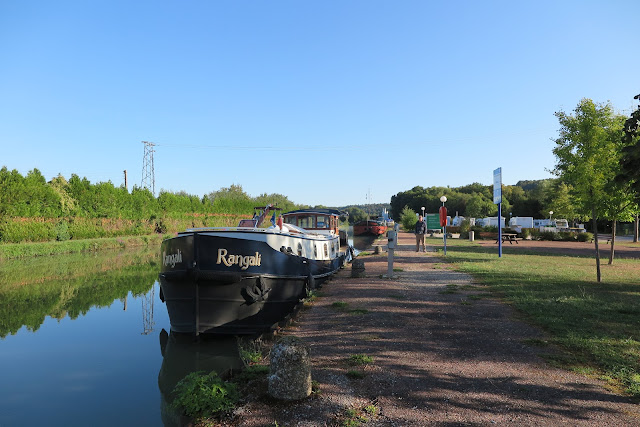 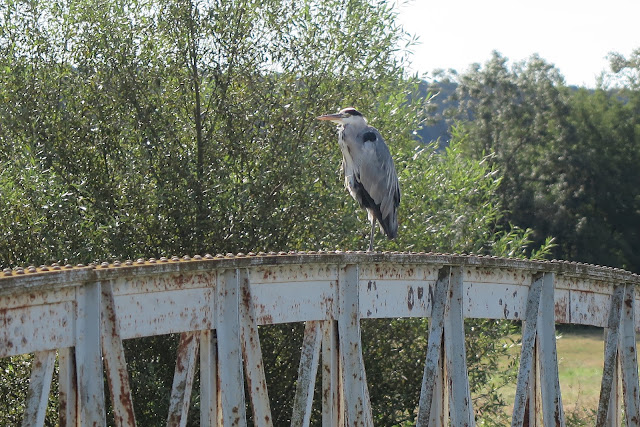 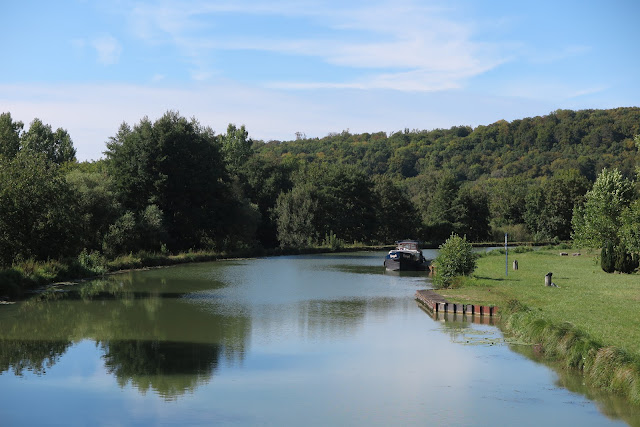 
Tuesday 28th August
Rolampont PK 138 to Langres 149
11km 7 locks 2 hours
The port at Langres was quite busy but we got a space to moor and we stayed here for 3 nights.  We caught the bus to the town centre and enjoyed looking around the town and seeing the fantastic views from the city walls.  It was great to meet up with Lesley and Stewart off Calliope.  They were on their way to Sillery for the winter. 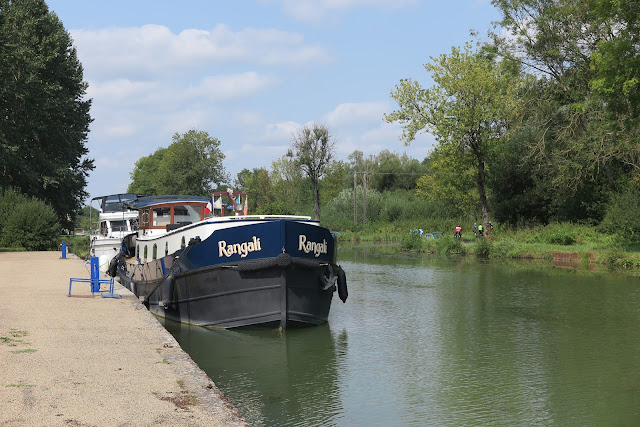 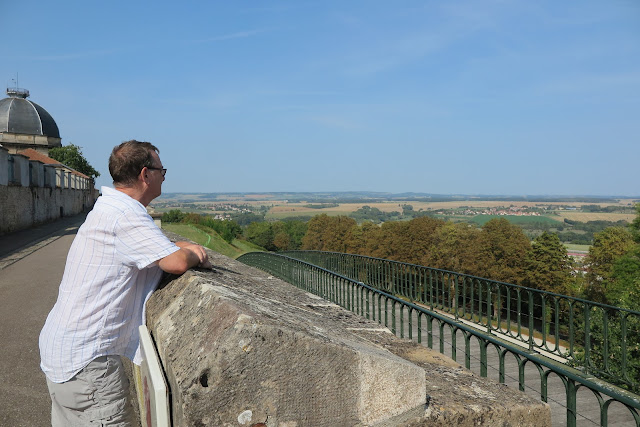 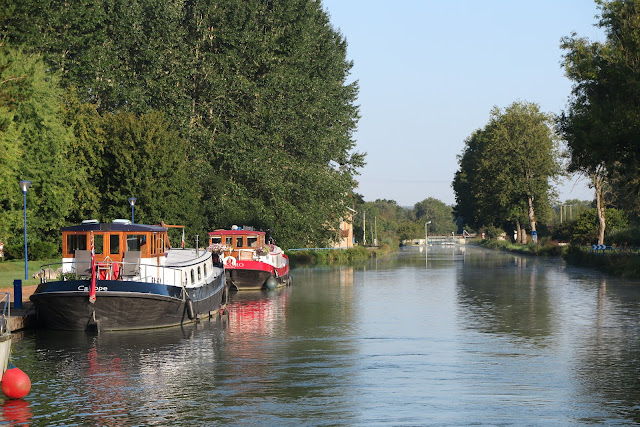 We early departed from Langres and had problems with the first lock of the day and typically there was no where to tie up, we managed to ring VNF and after about 30 mins a lock keeper arrived to sort out the lock.  The tunnel was fine, but long.  We then had some big locks to go down, I was pleased we were going down rather than up, so it was all very easy. 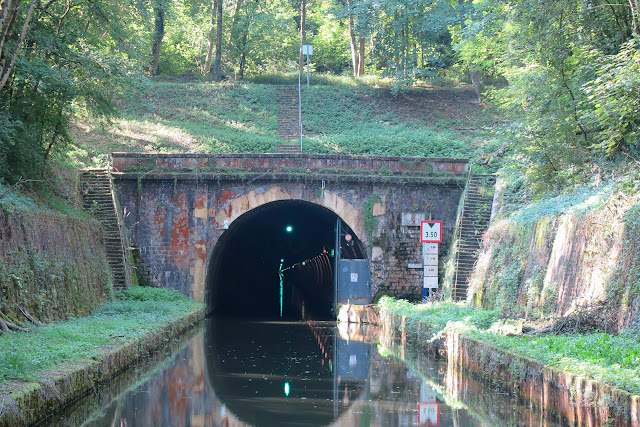 The mooring at Villegusien wasn't that pretty but was ok, and we had a nice walk to and around some of the nearby lake and we had lunch at the campsite cafe on the Saturday.


Sunday 3rd September
Villiguien PK167 to PK186
19km 16 locks 3 hours
As nice rural mooring just downstream of Lock 24, we liked it here as it so rural so we stayed here two nights. 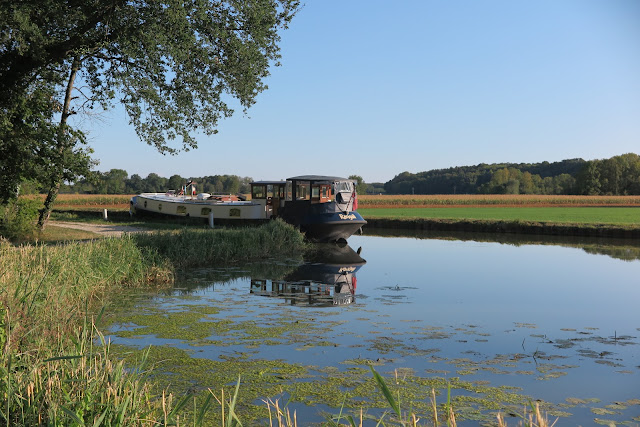 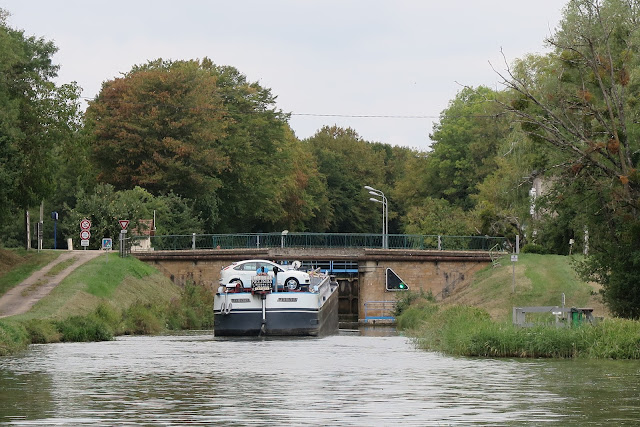 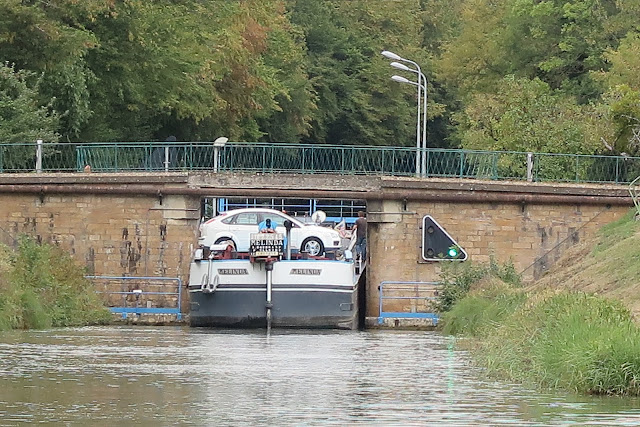 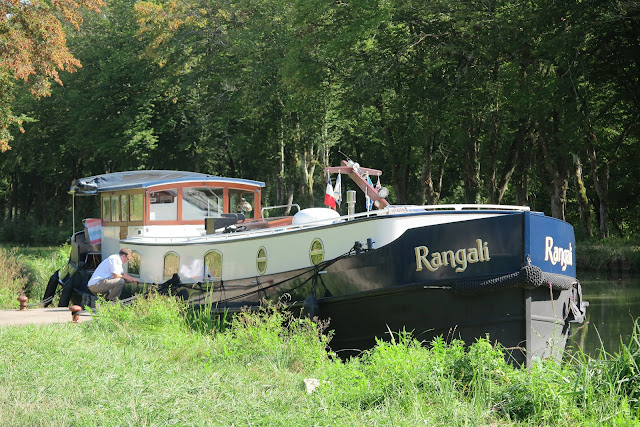 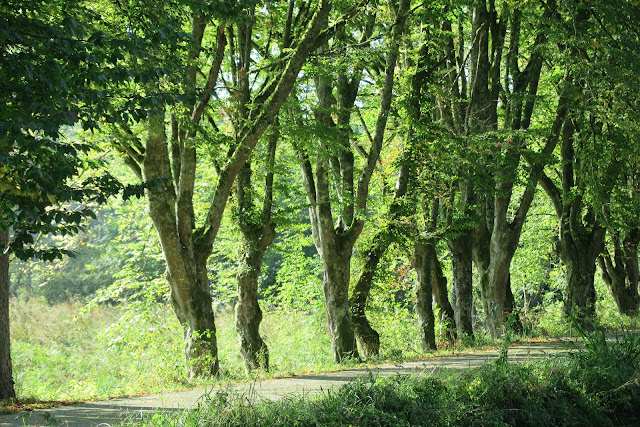 This was another nice quiet mooring just enough space for us.  We cycled into town to the supermarket and boulangerie, a pretty town so worth the effort.

The bollard was a bit wonky at this mooring but was solid enough.

Friday 8th September
PK212 to Maxilly PK222
10km, 3 locks 1.6hrs
Maxilly is the last mooring before leaving the canal.  It's a nice mooring, jetons bought at boulangerie for electric.  It was quite busy with commercials turning up late after the lock had closed for the evening.